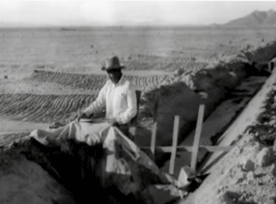 The Hohokam were the only culture in North America to rely on irrigation canals to supply water to their crops. In the arid desert environment of the Salt and Gila River Valleys, the homeland of the Hohokam, there was not enough rainfall to grow crops. To meet their needs, the Hohokam engineered the largest and most sophisticated irrigation system in the Americas.

The canals were perfectly laid out on the landscape to achieve a downhill drop (or gradient) of 1 to 2 feet per mile. Many of the canals were massive in size. The Arizona Museum of Natural History discovered a prehistoric canal at the north end of Dobson Road that measured 15 feet deep and 45 feet wide. Irrigating up to 110,000 acres by AD 1300, the Hohokam irrigation systems supported the largest population in the prehistoric Southwest. 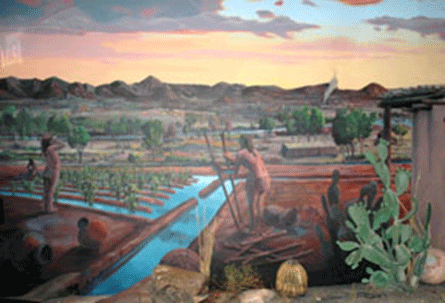 Mural in the Arizona Museum of Natural History of the Rowley Site, near Park of the Canals in Mesa, c. 1200-1450, by Ann and Jerry Schutte.

Life for the Hohokam focused, in large extent, on agriculture and growing crops. The canals required the organization and labor of thousands of people to build, maintain and operate. Farmers had to maintain the fields and open and close the irrigation gates at the proper time. They had to protect crops from rabbits, birds and other marauders. Planting and harvest times would require the efforts of the entire community.

Disease was a significant problem for pre-industrial people. While some in the communities had medical knowledge and offered traditional cures, treatments were not available for many maladies. Infant mortality was high, with perhaps one out of every four children dying before their first birthday.

Life was not all work and illness. The Hohokam held large community gatherings at ballcourts and temple mounds. Here, people would trade goods and young people could meet potential marriage partners from other villages. 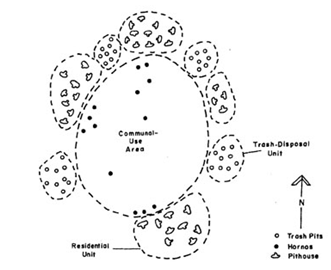 Structure of a Hohokam village.

The Hohokam organized their villages to separate and coordinate different activities. Houses clustered into residential areas. To keep the village neat, the Hohokam disposed of trash in pits and piles within specific areas. They used large open areas in the village for messy activities including the use of large earth ovens (hornos). Hornos, which measured 6 to 10 feet across and 6 to 8 feet in depth, were used to pit bake the hearts of agave plants and other foods such as corn and possibly squash.

Families lived in single room structures that surrounded rectangular courtyards where daily activities took place. Each room would house a nuclear family consisting of mother, father and their children. The families joined in these 'courtyard groups' were closely related and formed an extended family unit. In Hohokam society you would live in a group with your parents and your brother's and sister's families. This extended family functioned as a basic social and economic unit, sharing resources and daily chores. 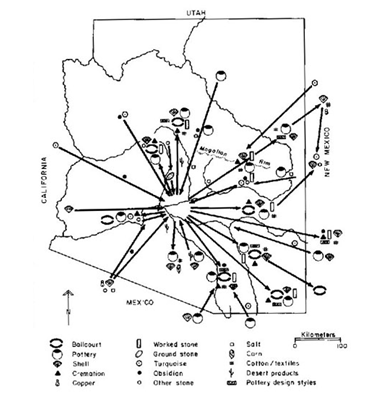 The Hohokam traded goods widely across the American Southwest and Mesoamerica (Mexico). Hohokam cotton and woven goods such as blankets were highly prized and fetched a good price in the exchange networks. Shell bracelets, pendants, rings and other objects made of shell from the Gulf of California were traded into the Hohokam area. Pendants and other objects made from turquoise were traded from many different sources into the Hohokam heartland. Ceramic pots were traded widely and it is not unusual to find vessels made in northern, southern and eastern Arizona in local Hohokam sites. Many of these traded ceramics are unusual shapes such as canteens, duck effigy pots and other unique types.


Many rare objects typically used only by the elites of Mesoamerican society, were traded into the Hohokam area. Copper bells, created from native melted copper and using a lost wax technique, were obtained from northern and western Mexico. Pyrite mirrors, made from a round disk of schist on which were glued thin sheets of pyrite (a reflective metallic mineral often called fool's gold), were traded from the Valley of Mexico.

Hohokam craftsmen produced a wide array of artifacts made from stone, bone, shell and clay. Stone was chipped into cutting tools with sharp edges or hammered into other shapes. Stone bowls sported a variety of motifs including rattlesnakes, frogs, and lizards. Highly symmetrical and well-polished axes were produced in large numbers at Mesa Grande. Petroglyphs, rock art pecked onto boulders, can be found throughout the Hohokam area.

Bone was carved into intricate shapes. Long bone hair pins, often found with males, had ends carved into mountain sheep and other forms, including a human foot. Bone tubes were carved with elaborate geometric designs. Pointed awls and needles used in making baskets and clothing are common in Hohokam sites.

A variety of shells were collected in the Gulf of California and traded into the Hohokam area. Artisans used shell to make a wide variety of objects, many of which were used as ornaments. Shell bracelets are a common artifact type found on Hohokam sites including Mesa Grande. Crafted by removing the center of a clam shell, the bracelets were typically worn by men on their upper left arm. Shells with designs etched into them with a mild acid represent one of the earliest examples of this advanced technology.

Figurines, small fired clay dolls, are also found in the early Hohokam villages and are similar to those made in Mesoamerica. Figures give us information on Hohokam dress and ornamentation. Some figures portray mothers with infants and children and several have been found of pregnant women and even women in childbirth. 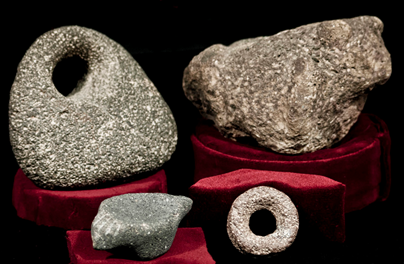 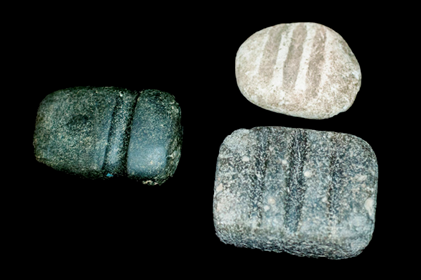 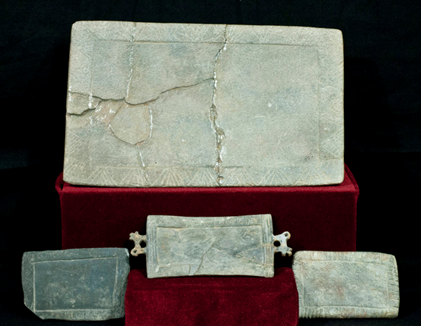 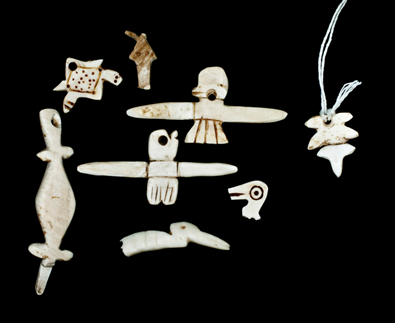 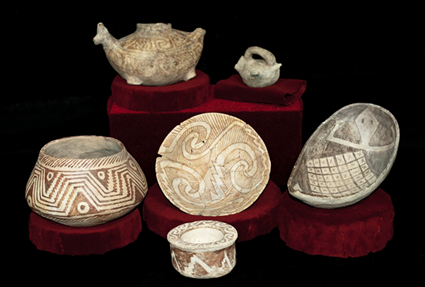 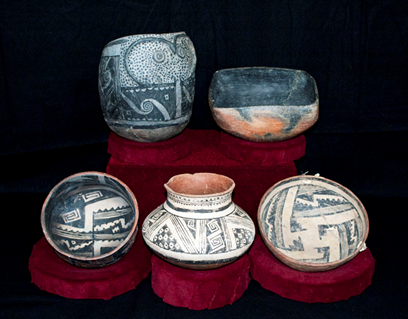 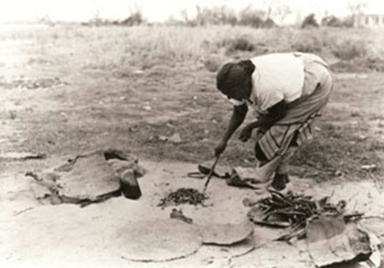 The art of making ceramics was highly advanced in the Hohokam culture. Using different firing techniques and paints hey made jars and bowls of different styles and colors. Archaeologists once thought that each Hohokam village produced the bowls, jars and scoops that it needed. Recent research has revealed, however, that certain communities were centers of ceramic production and provided specific types of pottery to other villages through trade.

Ceramics are produced from two distinct materials, clay and ground up stone or "temper" that is added to the clay to make it easier to work, resistant to cracking in the firing process, and more durable after the ceramic was fired. By studying the temper, researchers can determine where the ceramic was made. By examining the ceramics found at single village, archaeologists can identify the other villages with which it traded. This provides information on the interaction between villages and helps to understand trade networks and to reconstruct social, political and economic ties. 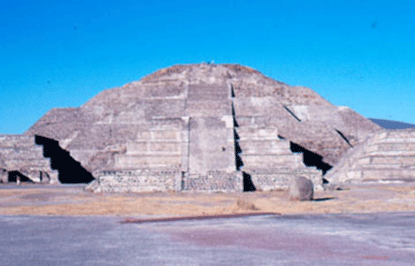 Pyramid of the Moon, Teotihuacan, Mexico 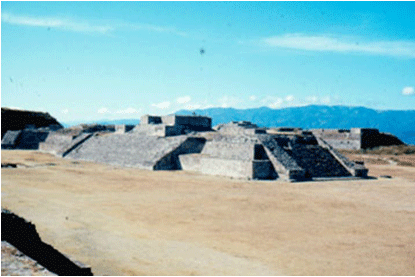 The Hohokam are typically considered to be a southwestern Native American culture. Yet they clearly have very strong ties to the cultures of Mesoamerica, especially Mexico. Hohokam platform mounds are similar to mounds built and used in Mexico by such groups as the Toltec, Aztec and Maya. Ballcourts, while architecturally different from those to the south are also a clear cultural connection with the ideology of Mesoamerica.

Even the types of foods utilized by the Hohokam show a Mesoamerican connection. Corn (maize), beans and squash were the three major crops in the prehistoric American Southwest and were also the principle foods of the Hohokam. But the Hohokam also used other Mesoamerican food plants such as agave and amaranth.

What Happened to the Hohokam? 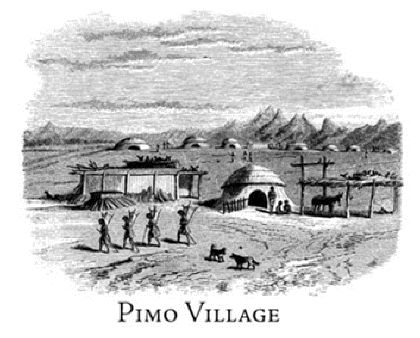 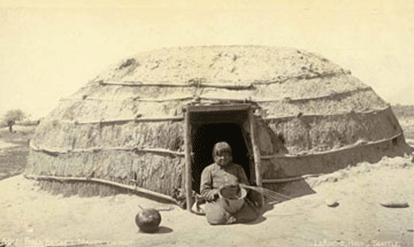 One of the most intriguing questions concerning the Hohokam focuses on the collapse, when evidence of the Hohokam is no longer seen in the archaeological record. What happened to this amazing culture that flourished for so many centuries? Researchers have suggested floods, salt buildup on the fields and warfare as causes of decline, but there are reasons to doubt each of these explanations.

The Hohokam decline is part of a larger pattern of abandonment seen throughout the American Southwest. Recent studies suggest that people began migrating toward the south during a major drought in the Four Corners area in the 1200s. From AD 1200 to 1450 large portions of the prehistoric Southwest were largely abandoned.

Recent studies show a dramatic rise of population in the Salt River Valley from AD 1100 to 1300. At the beginning of this period, the Hohokam constructed their last large irrigation network on the river and used all of the available water to irrigate crops. This stressed their most critical resource, water. Major changes in Hohokam culture resulted, including the construction of the mounds. While these changes appear to be in response to a need to share water and feed an ever increasing population, their attempts fail. From 1350 to 1450 the population plunges and traces of the Hohokam disappear from the archaeological record.

Despite this decline in numbers a smaller O'odham population survived and is a thriving culture today. The members of the Salt and Gila River communities celebrate their heritage as descendants of the ancient Hohokam.