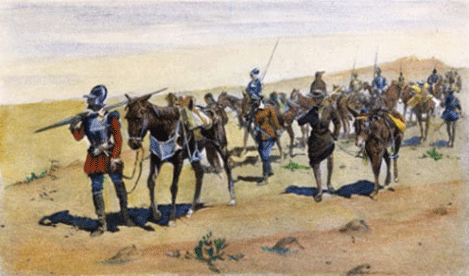 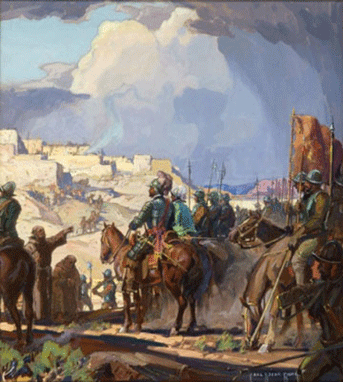 Spanish exploration of the Southwest often exemplified feats of great preservation, determination and daring. Some of the earliest expeditions skirted the Hohokam area but did not penetrate its heartland (Cabeza de Vaca, 1528-1536; Fray Marcos de Niza, 1539; and Coronado 1540).

In addition to his duties as a Catholic priest, Father Kino was also an explorer and map-maker.  He traveled thousands of miles exploring the Gila River region to where the Gila connects with the Salt River. He interacted with Akimel O'odham (Pima) and Tohono O'odham (Papago) and other Native American peoples, and left the first descriptions of the remains of Hohokam civilization. 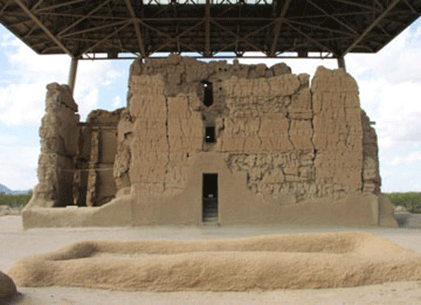 "The Casa Grande is a four story building, as large as a castle and equal to the largest church in these lands of Sonora. Close to this Casa Grande there are thirteen smaller houses, somewhat more dilapidated, and the ruins of many others, which make it evident that in ancient times there had been a city here. On this occasion and on later ones I have learned and heard, and at times have seen, that further to the east, north, and west are seven or eight more of these large old houses and the ruins of whole cities, with many broken metates and jars, charcoal, etc." 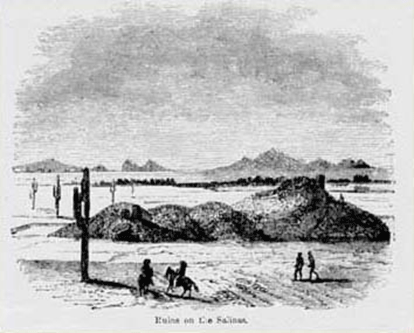 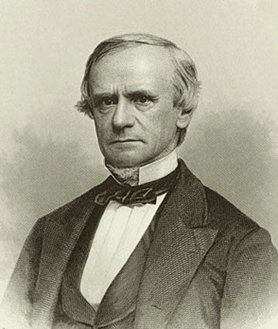 Following the Mexican War in 1850, John Russell Bartlett was appointed to the United States-Mexican Boundary Survey Commission. While living with the O'odham on the Gila River he learned about the large prehistoric mounds in the Salt River Valley to the north. Following his O'odham guides, he traveled up the Gila River to its confluence with the Salt River and turned east into what is now the Phoenix metropolitan area. On July 4th, 1852 he approached what is now the city of Mesa:

"A ride of a mile brought us to the table-land, when we made for a large mound or heap which arose from the plain. In crossing the bottom we passed many irrigating canals; and along the base of the plateau was one from twenty to twenty-five feet wide, and from four to five feet deep."

"On reaching the great pile, I found it to be the remains of an adobe edifice, its sides facing the cardinal points. Portions of the wall were visible in only two places, one near the summit, at the south end, where, from the height of the pile, it must have originally been three or four stories high; and the other at the northern extremity, on the western side. These remains just projected above the mass of rubbish and crumbled walls. The rest formed rounded heaps of various heights and dimensions, worn into deep gullies by the rain. . . . .  From the summit of the principal heap, which is elevated from twenty to twenty-five feet above the plain, there may be seen in all directions similar heaps; and about a mile to the east, I noticed a long range of them running north and south, which the Indians said were of similar character to that on which we stood. In every direction the plain was strewn with broken pottery." 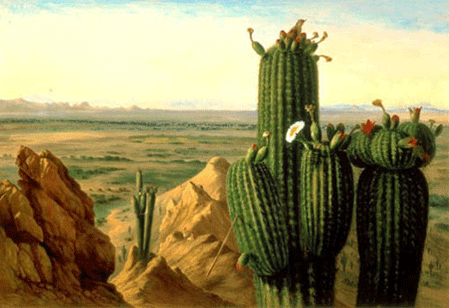 Painting from the boundary expedition of a mountain near Rio Gila (Gila Butte?) by Henry Cheever Pratt, published in Bartlett's book. 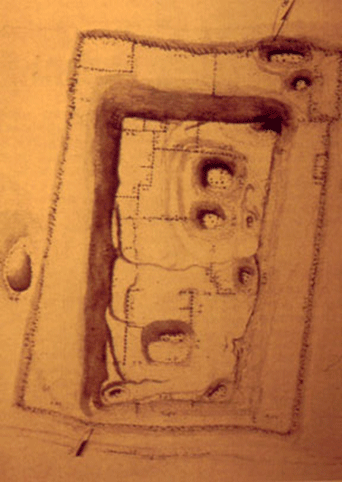 Watercolor of the Pueblo Grande Mound by Adolph Bandelier. 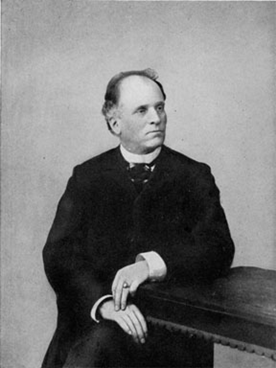 Becoming bored by the responsibilities of his family business, Swiss born Adolph Francis Alphonse Bandelier became a student of Lewis Henry Morgan, one of the pioneers of American anthropology. While lacking a formal education, Bandelier transformed himself into a prominent authority on the history and prehistory of the American Southwest.

His explorations of this area in the late 1800s transformed the public's understanding of the region. Bandelier was one of the first to chronicle the prehistoric remains in the Salt River Valley, creating watercolor prints of several major ruins, including the Pueblo Grande platform mound. While he did not write a description of Mesa Grande, he did note in his journal that he caught "a glimpse of the huge mounds at Mesa City." Clearly, he was speaking about the Mesa Grande platform mound and perhaps also the second mound to the east, located at Country Club Drive and the Tempe Canal.

Bandelier's explorations captured the imagination of the public about the Southwest and laid the groundwork for future studies. 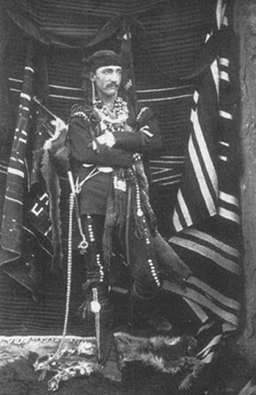 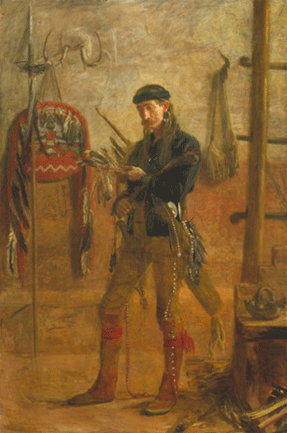 Justly famous for his work at Zuni from 1879 to 1884, Frank Hamilton Cushing led the Hemenway Southwestern Archaeological Expedition to the Salt River Valley in 1887 and conducted the first professional excavations in Arizona.

Cushing's notes and journals tell us about the archaeological remains in the valley before many were destroyed by development, including this trip to Mesa Grande:

"Early on the following morning we followed the road which leads eastward along the southern side of the Salado to the only moderately high but even more level and extensive gravel-strewn plateau, here dignified by the name of "Mesa."  As we turned the summit I was first able to see near at hand the remains of the most extensive ancient settlement we had yet seen, or I had ever dreamed would be possible for us to find within the limits of the United States. Before us, a long series of elevations which I at once recognized as house- and pyral-mounds, lay stretched out in seemingly endless succession monotonously distributed low mounds, there stood the yellow, almost angular slopes of the great central temple-mound which had once formed the place of worship and citadel of the dwellers in this far-reaching cluster of pueblos.  I could not resist the temptation to turn from the road and visit this tremendous mound.  It was the largest and with one exception the highest we ever found in the Southwest." 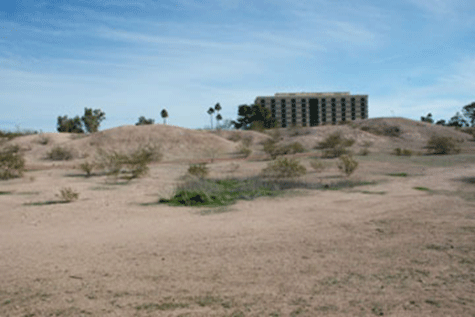 View from the west today.

Called by some the "Dean of American Archaeology," Warren K. Moorehead was an early practitioner in the field of American archaeology. Moorehead wrote broadly on American archaeology, especially the mound builders of the Eastern United States. In the late nineteenth century, archaeology was a field that generally lacked professional training and established field methods. While Moorehead took several years of college courses, he never earned a degree, and his contemporaries often criticized his fieldwork. As with many early archaeologists, Moorehead focused primarily on collecting artifacts for museum display.

In 1897 Moorehead, with a crew of five men, spent a week excavating at Mesa Grande. Much of his effort went into digging a large trench from the ground level to the high point on the south end of the mound. While he published his work at Mesa Grande in 1906, the report lacks useful detail. Moorehead commented in his report that "the building [Mesa Grande] is so extensive that the work done appears insignificant--a mere scratching." 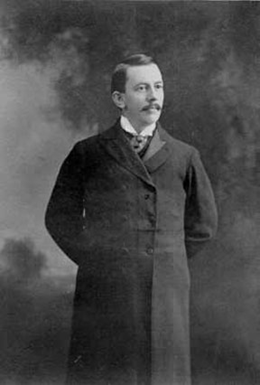 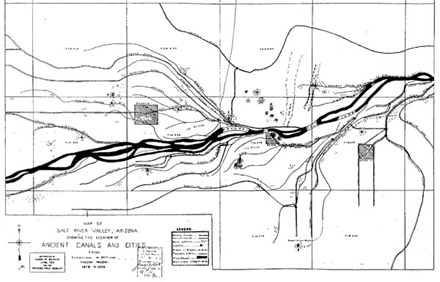 Members of the Hemenway Southwestern Archaeological Expedition (1886-1894) under the director of Frank Hamilton Cushing produced some of the first maps of the prehistoric sites and canals in the Salt River Valley. Draftsman F.W. Hodge and topographer Charles Garlick, members of the expedition, produced a map that was limited in scope. Cushing found that Goodwin, a local rancher, was very familiar with the sites and prehistoric canals and requested that he make a map based on his knowledge of the area.

Herbert Patrick produced one of the first maps to cover the entire valley. Patrick was a professional surveyor and map maker and his map was accurate for the time. His interest in the prehistoric villages and canals lead him to begin recording them as early as 1884.

A printed copy of Patrick's map was finally released in 1903 along with a small booklet entitled The Ancient Canal Systems and Pueblos of the Salt River Valley. Information from Patrick's map and those of the Hemenway Expedition were incorporated in Turney's maps in the 1920s. This information is invaluable to archaeologists today. 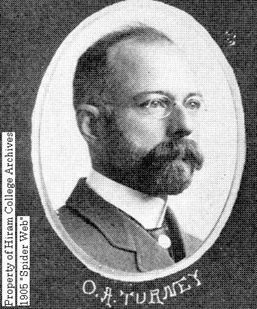 In the early 1900s, Dr. Omar A. Turney was the face of archaeology in the Salt River Valley. An engineer who worked for the City of Phoenix, Turney became interested in the prehistoric irrigation canals in the Salt River Valley. This interest led to the creation of the first comprehensive map of the prehistoric canals and villages of the Salt River Valley (1922). A companion brochure entitled The Land of the Stone Hoe provided the basic information on the people Turney called "The Canal Builders" to the citizens of Phoenix. Turney's Prehistoric Irrigation in Arizona, difficult to find today, was widely read in Phoenix for decades. Turney provided support and training to Frank Midvale, a young man with a burning interest in archaeology. This is perhaps Turney's most enduring legacy.

"The greatest irrigation achievement of ancient man in America had been wrought in this, the land of Forgotten America. These were the Original Engineers, the true Pioneers; the feats performed with the Stone Axe and the Stone Hoe demanded as lofty purpose and high courage as those created with later day devices."

"Their middens have been leveled, their shards have been read, their era told. Treasure their artifacts, you who live in Phoenix, the city from them so well named. Are they yours alone: are they not rather the heritage of one race to another?" 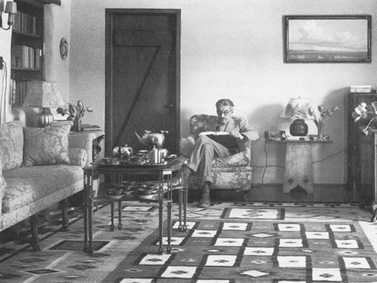 Harold Gladwin amassed a personal fortune on the stock market by 1922 and then abruptly left to pursue his lifelong passion, archaeology.

Following the suggestion of Alfred Kidder, Gladwin began research to define the culture that he called the Hohokam. With his wife Winifred he founded Gila Pueblo Archaeological Foundation in 1928 in Globe, Arizona. Using his own funds, he built a research center on top of an archaeological site originally known as Healy Pueblo. The site was excavated and the research center, constructed in the style of a pueblo, was built directly atop the prehistoric walls.

Gladwin established his own method for defining cultures and time periods based on prehistoric ceramics and began a search for the " Red on Buff" culture, locating the limits of Hohokam occupation in Arizona. He then turned to establishing a chronology by excavating Hohokam sites of different time periods. His most famous excavations were at the site of Snaketown, a site that spanned much of Hohokam culture history. Gladwin died in 1983 at the age of 100. 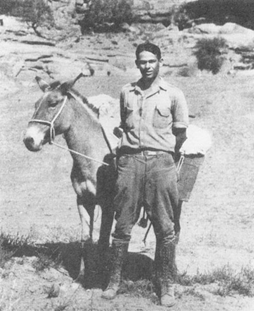 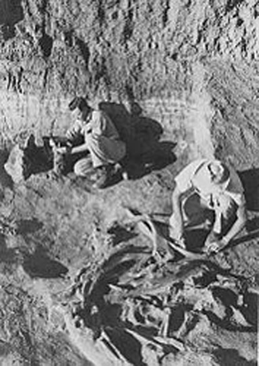 Emil Haury and Byron Cummings at the Double Adobe mammoth kill site in 1926.

Fondly known by all as "Doc," Emil Haury became the dean of Hohokam studies and a major contributor to Southwestern archaeology. After earning his bachelor's (1927) and master's (1928) degrees at the University of Arizona, Harold Gladwin hired Haury at Gila Pueblo Archaeological Foundation in Globe.

As part of the Gila Pueblo staff, Haury conducted extensive field work throughout the Southwest, with a focus on the Hohokam. His excavations at Snaketown in the 1930s established the Hohokam chronology and defined Hohokam material culture. Gladwin supported Haury's study at Harvard University, where he wrote a dissertation on Frank Hamilton Cushing's earlier work in the Valley.

Returning to the University of Arizona, Haury worked to define the prehistoric culture known as the Mogollon, did the key work defining the earlier desert cultures known as the Archaic Period, and continued to research the Paleoindian mammoth hunters of Arizona. His work at Snaketown is among his greatest legacies, particularly his excavations there in 1964 and 1965 that resulted in his book The Hohokam: Desert Farmers and Craftsman.