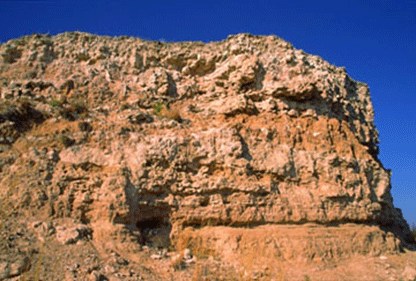 Natural layers of caliche in arid desert soils from Texas.

Caliche is a hard, white deposit that forms under the ground. It contains calcium carbonates, minerals that are leached down through the soil by rain and deposited as a "hard pan." The Hohokam mined this material and mixed it with water for use as a building material.  The ancient builders used caliche in the walls of the mound and to create the floors in rooms.  By sifting out the course material, builders produced a fine plaster and used it to coat the walls of the mound. This material is so durable that finger impressions of the Hohokam workers who built the walls are often still preserved in the plaster.

The Hohokam excavated large holes in the ground, referred to as barrow pits, to extract the caliche. A very large barrow pit was located to the northwest of the mound, just beyond the large tamarisk tree where today is located the reproduction of a Hohokam ballcourt. Now only a small remnant survives but at one time it was a large open pit. Early Mesa residents filled the pit with water from the historic canal to the north. It was known as the Mesa Pond. 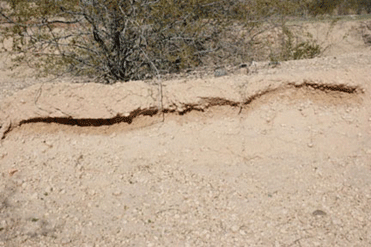 When Mesa Grande fell into disuse in the 1400s the natural forces of wind and rain began a cycle of erosion. As the wooden roofs of rooms gave way, the standing walls began to deteriorate. Rain was the strongest agent of weathering. As rain drops struck the walls, they dislodged small grains of soil. Water penetrated the face of the wall, causing chemical weathering and the leaching or physical removal of materials. Water ran down wall surfaces and cut grooves. Wind, especially high winds carrying small particles of soil, also creates erosion. Temperature changes and wet and dry cycles caused expansion and contraction of walls, a process that can create cracks.

The greatest threat to walls occurred at their base. The walls wick or carry up moisture from the ground. This moisture then evaporates out of the face of the wall, leaving behind salt crystals that loosen particles of soil. This process, known as basal erosion, weakens the base of the wall, which ultimately becomes unstable and collapses. The remaining stubs of the walls were eventually buried and hidden from view.

When archaeologists uncover buried walls their tops are badly eroded, reflecting the time when they were exposed to weathering.

When John Bartlett first visited Mesa Grande in the 1850s and drew a picture of it, only a few standing walls remained. Today, even they have fallen from natural erosion and perhaps the impact of early visitors to the site. 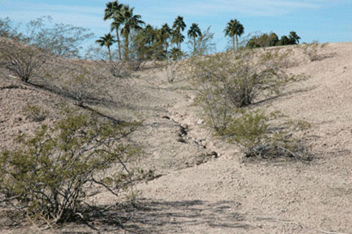 Erosion Gully on the East Side of the Mound. 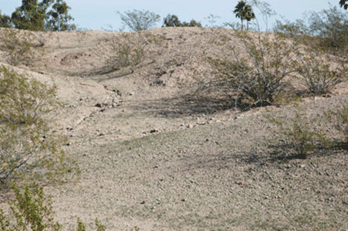 Erosion Gully on the West Side of the Mound.

Visitors viewing the Mesa Grande mound quickly notice the deep erosion gullies cutting into the mound. The gullies give the impression that the mound is eroding away before our very eyes! But excavations into these features tell a different story. When the gullies first formed, largely by monsoon rains, they cut deeply into the mound. Periods of deposition followed when sediments partially filled the channels.  Eventually, through periods of cutting and filling, the gullies reach a relatively stable state and further erosion continues only at a very slow rate, minimizing the damaging effects of natural weathering.

The Symmetry of Mound Erosion 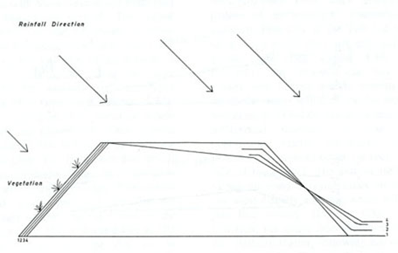 The Dynamics of Mound Erosion. 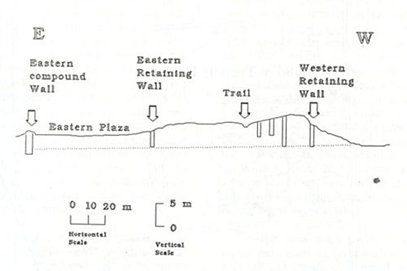 Cross section of Mesa Grande from the Eastern Plaza over the mound, showing the effects of mound erosion.

Have you noticed that the Mesa Grande mound looks much taller when viewed from the west side (the parking lot area) than it does from the east side? Like other ancient mounds, Mesa Grande erodes in an asymmetrical pattern that is determined by the prevalent direction of wind and rain. Rains from the southwest rounded off and lowered the eastern edge of the mound and removed soil to fill up the eastern plaza. The raised ground level of the eastern plaza and the lowered eastern edge of the mound makes Mesa Grande appear smaller from the east.  The western side of the mound, not affected by this process of erosion and deposition, reveals the height of the mound as it appeared during its use by the Hohokam. 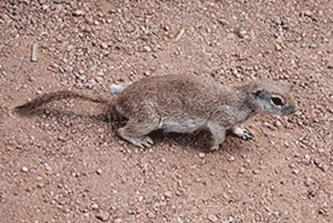 If you are quiet and look closely, at the right time of the year, you may see a Round-Tailed Ground Squirrel scampering around the mound area. Native to the American Southwest and Northern Mexico, they burrow into the ground around mesquite trees and creosote bushes. At Mesa Grande, they thrive in their native Sonoran Desert vegetation and are protected from natural predators. When they dig burrows into the mound they often start a process of erosion that can ultimately lead to the large gullies that cut into the mound.

The Hohokam raised a specific variety of agave, Agave murpheyi, as a source of food. During its life, the agave accumulates and stores sugars in its "heart," located in the soil under the leaves. When the plant has enough stored sugar it sends up a large stock containing small plants (or bulbils) that eventually drop to the ground, root and grow. After stocking, the agave dies.

The Hohokam raised agave and when they saw the stock beginning to form, they knew it was ready for harvest. The leaves were removed and used as a source for a tough fiber for textiles and cordage. The heart was dug up and baked in a large earth oven or horno, a hole dug into the ground that measured about 6 feet in diameter and 5 to 6 feet in depth. Baked agave is sweet and is often said to have a flavor similar to caramel. It is still served at fiestas in some areas of Mexico. 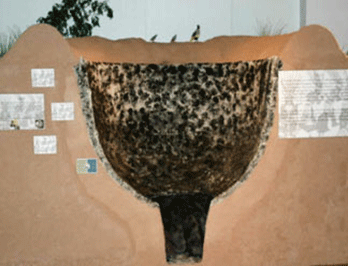 Mesa Grande is a small island of native Sonoran Desert plants in an urban environment. Some of the plants include: 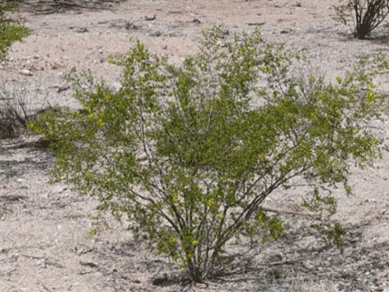 The creosote bush can be one of the longest-lived plants in North America. This plant will create a new crown or cluster of branches every 30 to 90 years. Through this process of renewal, the plant can live for hundreds and even thousands of years. The O'odham people used this plant for many medicinal purpose. 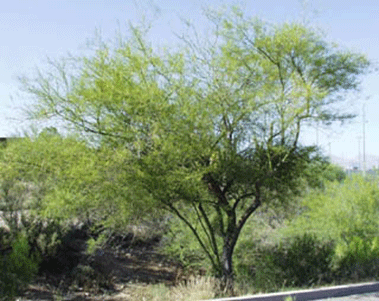 With its characteristic green bark, the paloverde is a common tree of the Sonoran Desert.

Amaranth, often considered a weed today, produces seeds that Native Americans ground into flour. The seeds are high in protein. 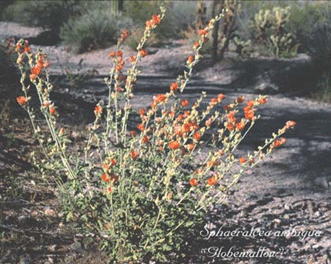 Some individuals are allergic to this shrubby common flowering perennial, which is sometimes referred to in Spanish as hierba muy mala.  There are over 10 different species of Sphaeralcea in the Southwest, with varying flower color and leaf shape. 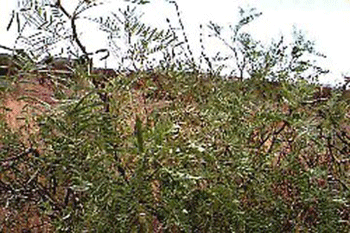 The mesquite tree, a common species in the Sonoran Desert, produces a bean. The dried husk of the bean was ground into a nutritious flour by many Native American groups. 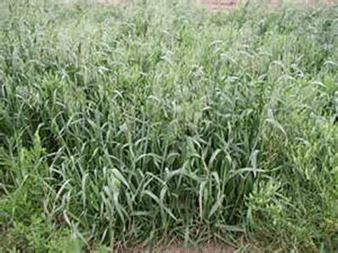 A wild relative of modern oat. The common wild oat is an invasive species originally from Eurasia.  Many consider wild oat a noxious weed that can greatly reduce crop yield.