The Archaeology Today section takes you around Mesa Grande as if you were on a tour of the site.  At station one, the interpretive material discusses mound construction.  Station two presents the features and excavations at the southeast corner of the site, and so on through nine stations across Mesa Grande. 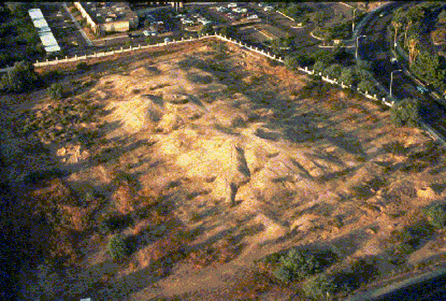 Aerial photograph of Mesa Grande from the southwest.

Hohokam platform mounds resemble the mounds and pyramids in Mexico and the eastern United States. Researchers think that the mounds were either ceremonial centers or the homes of Hohokam elites. Work at Mesa Grande and Pueblo Grande supports the idea that they were ceremonial centers.

The Hohokam built the mounds in stages, each addition making the mound larger or higher. The basic building blocks of the mounds are called cells. Cells had walls made out of caliche, a hard, white material that forms underneath the soil in our arid desert environment. Builders excavated caliche and mixed it with water to form a cement-like material. Cells resembled rooms, rectangular spaces with four walls but lacking doors or windows. The Hohokam filled the cells with compacted dirt to create the artificial mound. They then built rooms on top of and around the mound. Earlier, smaller versions of Mesa Grande are preserved within the mound we see today. 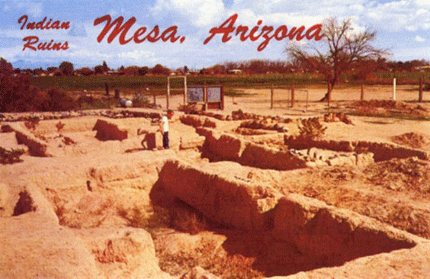 Postcard from the late 1950s showing excavations in the Room D area. 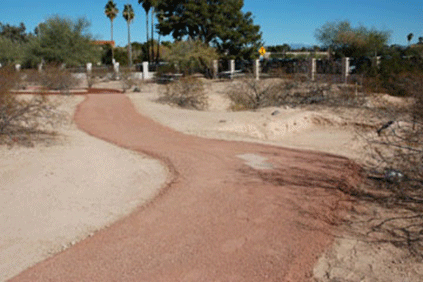 Arizona State University excavated Room D and several adjacent rooms in 1955-1956 to open sections of Mesa Grande for public viewing. In this area, the Hohokam configured the rooms very differently than the rooms in which people lived. Room D had three doorways, unlike the typical residential unit with only one. Two of the doorways align with the summer solstice and may have been used as a solar observatory.

Wind and rain badly eroded Room D when excavations opened it to the elements in 1955. While several walls are original, others have been reconstructed. Archaeological excavations at the mound exposed fragile walls and other features and created new cycles of erosion. Today, a strong preservation ethic guides archaeological work conducted by the Arizona Museum of Natural History. Archaeologists only work on those areas that previous excavations disturbed, often causing erosion. The new work stabilizes the mound and opens areas for public viewing. 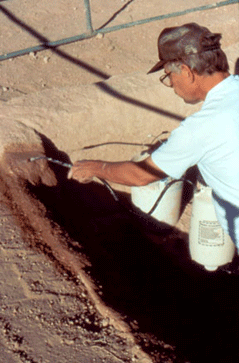 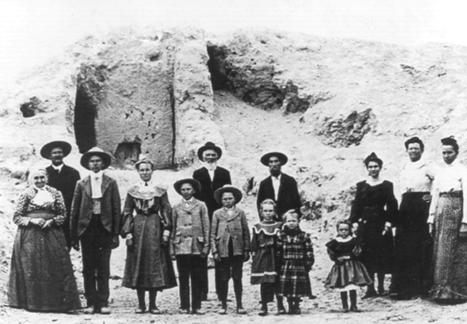 The Lewis family, around the turn of the 20th century, excavated the area known as the Shooting Gallery. This photograph, taken in 1904, shows the family in front of the excavation area.

The family uncovered the doorway of a room that stood on the mound at an earlier stage of development when the mound was smaller. One Sunday they tunneled into the mound and, after digging all morning, they leaned the shovel against the wall of the tunnel and went home to lunch. Upon returning they found that the tunnel had collapsed and buried the shovel inside. Omar Turney, who published this story in1929, said that archaeologists in the future would be very puzzled when they found this metal shovel buried in a Hohokam mound. The museumâ€™s Southwest Archaeology Team recovered the shovel, wooden handle intact but with the metal rusting and disintegrating.

After the Lewis family uncovered these massive prehistoric walls, they were used as a backstop for a shooting range, giving rise to the name Shooting Gallery. Hundreds of old bullets were recovered here. 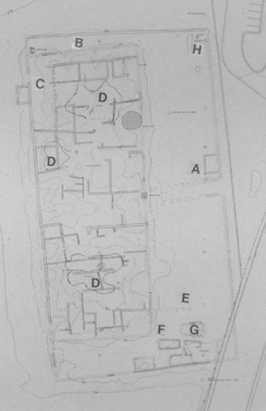 Map of Mesa Grande. The Entryway is at point A.

Large ridges of soil to the right and left are the remains of the compound wall, the large wall that surrounded the mound and the large plaza behind you. Here at a point in the center of the eastern compound wall -- the wall is missing.  People came into the mound complex through this entryway.

One of the first tasks for the preservation program was to explore Mesa Grande with ground penetrating radar (GPR). This allowed scientists to identify and protect buried walls and other features. The GPR program located two small walls, connected to this front entryway, that created a corridor up to the mound. Archaeologists excavated a small hand-dug trench to locate the walls found by the GPR. The walls were very narrow and probably only 2 to 3 feet tall.

The Eastern Plaza from near the Entryway.

The great plaza is on the east side of the mound.  The plaza served as an area where people gathered to observe rituals at the mound. Excavations suggest that the plaza was plastered with a thick layer of caliche. As this surface weathered, the people of Mesa Grande patched and refreshed the plaza with new coats of plaster. When the plaza required full replacement, workers covered it with a layer of soil and laid a new plastered surface.

The only room known to exist in the eastern plaza is located at the entryway. New evidence suggests that a smaller mound or feature may be located on the north side of the plaza, a possibility that archaeologists hope to examine in future.

The excavation of a small portion of the plaza surface revealed an area covered with fragments of shells and a set of stone tools. These stone tools were specialized types used in to work raw shell from the Gulf of California into ornaments. When rituals were not being performed at Mesa Grande, the Hohokam appear to have used the plaza for daily activities including the production of special artifacts.

Recent excavations in the north end of the mound
near where Cushing worked revealed a doorway filled with rubble.

This is the area excavated by Frank Hamilton Cushing and the Hemenway Southwestern Archaeological Expedition in 1887. Recent excavation work identified the many pits that Cushing described as being dug in this area by looters.

Here you see a massive wall, almost five feet thick, that was once the northern wall of the mound. A doorway, whose function is still unknown, was found in this wall. Beyond the threshold a ramped corridor may have led from the top of the mound down into a room buried inside the mound when it was expanded to the north. This northern most wall can be seen in the photograph. 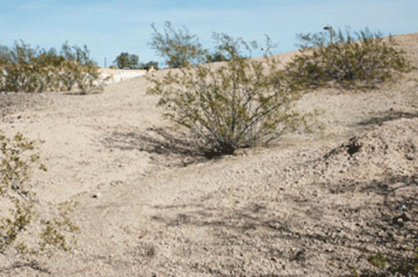 The Back Door from below.
The creosote bush marks the spot between the remains of two walls. 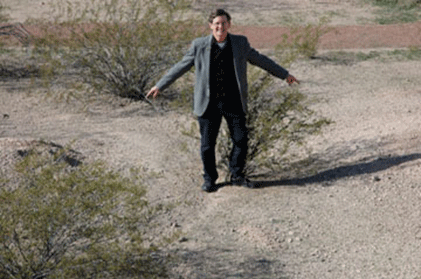 The Back Door from above.
Archaeologist Dr. Jerry Howard points to the two wall segments.

Mesa Grande is essentially a large rectangular mound. If you look closely, a small rectangular area is cut out of the northwest corner of the mound. The contour map readily reveals this feature.  This rectangular space is further defined by a wall.

A door in the wall allowed access to this space, but what could this be? One possibility is that one or more rooms existed here. Builders constructed the rooms on a raised platform of soil and extended the room walls up so that the roofs of the rooms were at the level of the top of the mound. This created a room buried inside of the mound itself. We believe that this space at Mesa Grande served a similar function.

There is a room adjacent to the doorway on the outside of the mound. Like the room at the main eastern entryway, people entering here may have left offerings or may have gone through purification rituals before entering the complex.

At Mesa Grande is a reproduction of the small ballcourt at the site of Snaketown on the Gila River. The ballcourt at Mesa Grande now lies buried beneath the lobby of the Desert Vista Hospital northeast of this location.

Hohokam ballcourts may have been used to play a version of the great Mesoamerican ballgame. Mexican ballcourts had stone walls and stone rings that served as goals. The game was played using a small ball made from natural rubber. Several of these balls have been found in archaeological sites in the Salt River Valley. The Hohokam courts had large posts at each end, possibly serving as goal posts. Like the courts in Mexico, they had a central pit, often covered with a stone slab and containing turquoise and other valuable or sacred objects.

The ballgame was more than a sporting event, it embodied important ritual aspects. The central pit was a portal to the underworld. The game symbolized battles between the gods in the sky and the lords of the underworld. 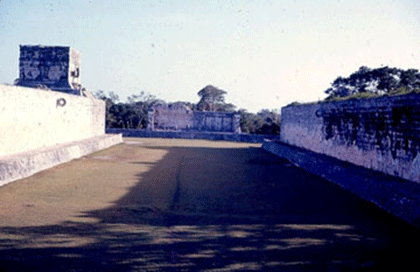 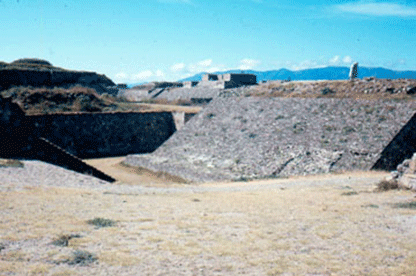 This artist's reconstruction, created in collaboration with an archaeologist and based upon scientific research, illustrates what Mesa Grande may have looked like in is final stage of growth.