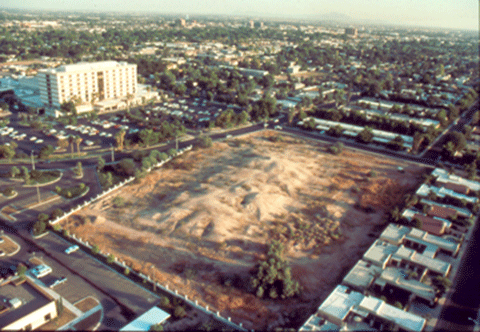 Mesa Grande by air from the northwest.

The ancient Hohokam, ancestors of today's O'odham people, built and used the Mesa Grande platform mound between AD 1100 and 1450. The mound was the public and ceremonial center for a one of the largest Hohokam villages in the Salt River Valley, a residential area that extended for over one mile along the terrace overlooking the river.

The Hohokam were the only cultural group in prehistoric North America to rely on massive canal systems, irrigating up to 110,000 acres of corn, beans and squash. Archaeologists from the Arizona Museum of Natural History excavated one prehistoric canal that measured 15 feet deep and 45 feet wide. These irrigation systems represented monumental efforts of labor and engineering. In the late 1800s farmers rebuilt and opened the brilliantly engineered Hohokam irrigation systems, some remain in use today.

Mesa Grande was one of the two largest temple mounds of the Hohokam. Its sister mound, Pueblo Grande, is preserved as a museum and cultural park by the City of Phoenix. 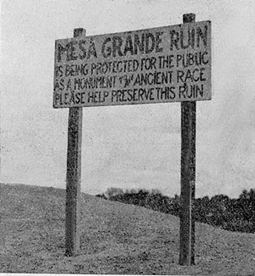 The drive to preserve Mesa Grande and open it to the public was Mesa's first historic preservation project. When this effort started is unknown but the first public event was a parade down Main Street organized by the chamber of commerce in 1927. This was the year that Pueblo Grande, the other great mound of the Hohokam, opened to the public.

Many such efforts followed and community support for a public facility has remained very strong through the years. In the early 1950s Frank and Grace Midvale organized the Mesa Grande Archaeological Society to promote the opening of the mound. This organization was transformed in 1955 into the Mesa Archaeological and Historical Society. The new group held its first organizational event at Mesa Grande where over 200 members joined.

A major force in the community, the Mesa Archaeological and Historical Society attracted prominent speakers including governors and legislators including Barry Goldwater. Today, this is the Mesa Historical Society which operates the Mesa Historical Museum. Those with archaeological interests began what is now the Southwest Archaeology Team, which is affiliated with the Arizona Museum of Natural History and continues to work on the Mesa Grande platform mound.

Of her, Omar Turney wrote:

"Needing the revenue which she might have obtained from pot hunters, both the scientific and the unscientific, she has steadfastly refused to permit them to destroy the fine old ruin of Pueblo de Lehi (Turney's name for Mesa Grande taken from the Book of Mormon). Due to the self-sacrifice of this lone widow there remains just one ancient building on the south side of the river which has not been torn open and its broken remnants used as highway dirt. The people of her faith should honor this woman: her faith will remain permanent in the country as long as it embraces women as true as she."

To preserve the mound, Madora Barker sold it to archaeologist Frank Midvale in 1927.

Frank Midvale's intense interest in archaeology began at a very young age and carried through his entire life. Funding his work through teaching and other jobs, Midvale roamed the Arizona desert recording Hohokam sites and mapping the prehistoric canal systems. His notes on file at ASU preserve valuable information on sites now long destroyed by modern construction.

Following his early experiences with archaeology in the 1920s, Midvale directed excavations of a platform mound at the site of La Ciudad covered today by Saint Luke's Hospital, for Dwight Heard, a wealthy Phoenix business man and founder of the Heard Museum. Thousands of visitors toured the excavations at La Ciudad from 1929 to 1936. Having earned a B.A. in anthropology, Frank was completing his master's degree at the University of Arizona when the United States entered World War II. He then served his country as a member of the Army Air Corps. He finished his formal career in archaeology in the late 1960s as an interpreter at Casa Grande Ruins National Monument, a job he loved.

In 1927 Midvale purchased Mesa Grande from Ann Madora Barker to preserve the site. With his wife Grace, he founded a group that ultimately became the Mesa Historical and Archaeological Society, which originally was dedicated to the preservation of Mesa Grande. Unable to open Mesa Grande to the public, Midvale transferred the mound to Jack and Acquanetta Ross in 1962. Midvale hoped that they had the influence to accomplish his dream of opening an archaeological park.  The preservation of Mesa Grande and his irreplaceable notes on Hohokam sites stand as Frank Midvale's lasting legacies.

Acquanetta was one of the most colorful people in the history of Mesa Grande. Acquanetta was a well-known movie actress, billed in Hollywood as the Venezuelan Volcano. She is perhaps best known for playing the title role in Tarzan and the Leopard Woman with Johnny Weissmuller, but she appeared in many other films.  Acquanetta married Jack Ross, a three time gubernatorial candidate and owner of a car dealership.  Acquanetta appeared in television ads for the dealership and became a beloved local celebrity.

Acquanetta's mother was Native American and Acquanetta grew up in the Arapaho community in Montana. She had strong feelings for Mesa Grande and worked for many years to preserve the mound and to open it to the public. In the 1970s, she worked tirelessly with the Mesa Historical and Archaeological Society and the City of Mesa to open the mound to the public. Having failed to get adequate support for the project, she played the key role in the 1980s in getting Mesa Grande into public ownership.

Mesa Grande was listed on the National Register of Historic Places on November 21, 1978.  In the 1980s, new preservation efforts were finally rewarded when, in response to significant community support, the City of Mesa purchased the mound in 1988 for $1.1 million.

Since then, the Arizona Museum of Natural History, through their award-wining avocational archaeology group, the Southwest Archaeology Team, has carried out stabilization, reconstruction and excavation efforts. In 1994, the museum developed a comprehensive master plan for Mesa Grande. Initial studies focused on defining the condition of the mound, identifying processes of erosion, and providing the information needed to prepare a stabilization plan. The stabilization plan was in place the following year, and volunteers began implementing the plan. The emergency stabilization was completed within a few years.

The Mesa Grande project is based on a strong preservation ethic that focuses upon preserving the mound for the future. While archaeological excavation provides an important window on the past, it is also a destructive process. Once a site has been excavated, it cannot be excavated again and much of the information it holds can be removed. On all archaeological excavations, the recording and preservation of information is critical.

The approach taken at Mesa Grande has been to re-excavate and stabilize areas that were disturbed by digging in the last 100 years. When first excavated, these areas began to erode and many such areas were still eroding at the beginning of the Mesa Grande archaeological project. Archaeologists re-excavated damaged areas of the mound, primarily removing soil that built up during the historic period. The archaeology team stabilized and restored portions of the mound and prepares the areas for interpretation for visitors when the park is opened. This process allows us to solve current erosional problems, create interpretive areas, avoid new damage to the site, and gather significant new information about the mound. 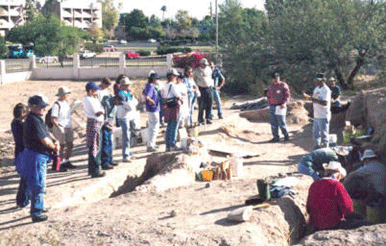 SWAT volunteers excavating an ancient wall at the north end of the Mesa Grande platform mound. In 1887, famed anthropologist Frank Hamilton Cushing excavated this area, which was in need of repair by the 1990s.

The Hohokam have been gone since around 1450, but the descendants of the Hohokam are our neighbors today.  Some are known as the Akimel Au-Authm or O'othom, the River People, also known as Pima.  Near Mesa Grande, people from these traditions live in the Salt River Pima-Maricopa Indian Communities and the Gila River Indian Community.  Representatives of both communities were crucial members of planning team for the Mesa Grande project, for which we are most appreciative.

Read the story of the Salt River Pima-Maricopa Indian Community

Read the story of the Gila River Indian Community

Other descendants of the Hohokam are the Tohono O'odham, the Desert People, also known as Papago.

Efforts to open Mesa Grande to the public were redoubled in 2005 and greatly facilitated by a generous grant from the Salt River Pima-Maricopa Indian Community.  The museum assembled a team of archaeologists, museum professionals, Native Americans, educators and others to plan an interpretation plan for Mesa Grande.

The team recognized that Mesa Grande is a sacred cultural heritage site in the middle of a vast urban landscape. The interpretive plan is based upon the unique and sacred nature of the site itself.  The modern footprint on the site will be the minimum necessary to tell the story of Mesa Grande and the Hohokam, and allow other places and formats to carry portions of the interpretive load, such as the Southwest exhibitions at the Arizona Museum of Natural History and electronic formats such as this website. 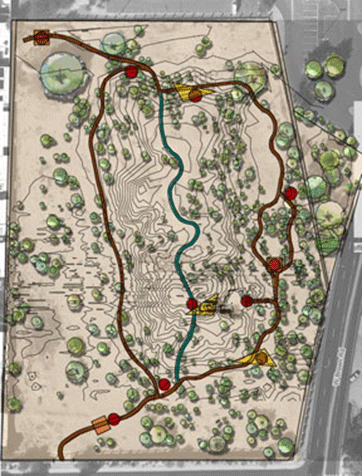 The Mesa Grande Cultural Park trail system.
The Welcoming Center and Gathering Place are at the orange square bottom left. The red circles along the trail mark the interpretive kiosks.
The yellow triangles mark locations of future erosion control canopies.

The layout of the interpretive trail is based upon tours given by the Southwest Archaeology Team (SWAT) since 1986.  There are nine stations on the trail that correspond to significant places on the mound.  There are four themes at each station.

The Hohokam:  Explores Hohokam origins, irrigation, village structure, trade, daily life, what happened to the Hohokam and other subjects.

Archaeology Today:  The state of our knowledge based upon the best modern scientific understanding of Mesa Grande, including mound construction, Room D, shooting gallery, entryway, eastern plaza, Cushing excavations, back door, ballcourt, and top of mound.

Look Closely:  Invites you to examine the science and natural history of Mesa Grande, including the symmetry of mound erosion, erosion gullies, wall erosion, caliche, and the plants and animals of the site. 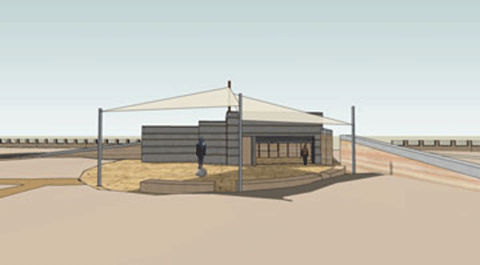 Welcoming Center and Gathering Place from the North 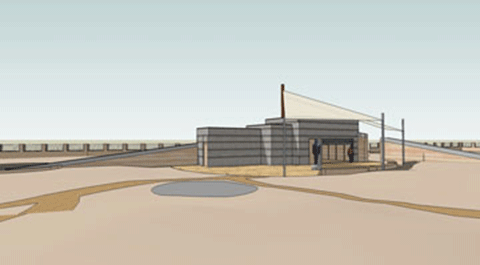 Welcoming Center and Gathering Place from the Northeast

Visitors will first arrive at the Welcoming Center, where they will purchase tickets and receive orientation to the Hohokam and to Mesa Grande.  The viga and latilla ceiling and banded masonry of the building suggest Native American building techniques, and the rammed earth tapered walls flanking the center on two sides reference the mound itself.

The Gathering Place is a semicircular courtyard paved with flagstones and shaded with fabric canopies.  Benches surround and further define the space, which can be used for group orientation or events.  A focal point of the Gathering Place is the lifesize bronze sculpture Hohokam by Antonio Pazzi. 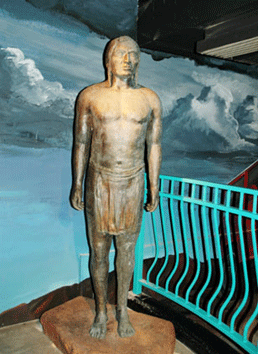