Closed all federal and city holidays

Educator-guided field trips are for parties of 15 people or more (3rd Grade and up) during regular season hours mid-October through the end of April.

Advance booking is required for all educator-guided field trips. Please click on the above school field trips button to book your field trip online.

*Please note that Group Bookings (Tours, field trips, private viewings) can only be booked until the end of April due to the probability of excessive heat.

The Hohokam, the ancestors of the Akimel O'odham (Pima), constructed the Mesa Grande temple mound. With walls made from "caliche," the calcium carbonate hardpan that forms under our desert soils, the mound is longer and wider than a modern football field and is 27 feet high. Construction of the mound began by AD 1100 and continued to at least AD 1400. A large adobe wall encloses the mound and a large plaza in front of the mound. In one corner of the site, volunteers from the Arizona Museum of Natural History constructed a replica of a Hohokam ballcourt, an open-air structure where ballgames were played using a rubber ball made from a local plant.

One of two Hohokam "great mounds" in the Salt River Valley, the Mesa Grande mound was a dramatic symbol of the power of this ancient community. The village surrounding the mound once covered over one-half square mile and was home to perhaps two thousand Hohokam. Situated near the headgates of one of the two largest networks of irrigation canals created in the prehistoric New World, the site of Mesa Grande controlled over 27,000 acres of highly productive farmland. Today, the streets, homes and businesses of Mesa, Arizona now cover most of the site. Preservation of the mound is due to the community and volunteer efforts already cited, and to the foresight of the City in acquiring the six-acre property.

The City of Mesa purchased the Mesa Grande ruins in the 1980s to preserve Mesa's premier cultural treasure and to open it to the public as an educational and recreational facility. This project has had the enthusiastic support of the community since 1927 when local citizens and the chamber of commerce held a parade down Main Street to promote its development. More recently, the Mesa Grande Neighborhood Alliance identified the development of Mesa Grande as a heritage tourism destination as their number one economic goal.

Mesa Grande is listed on the National Register of Historic Places. 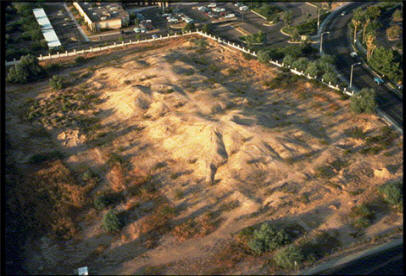 Aerial photograph of the Mesa Grande platform mound from the southwest. 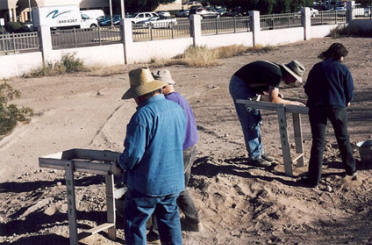 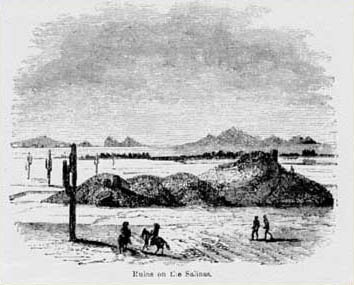 Woodcut illustration of Mesa Grande by Bartlett in the 1850s and published in his report,Ruins on the Salinas.  The Salt (Salinas) River is marked by the line of trees in the middle distance. 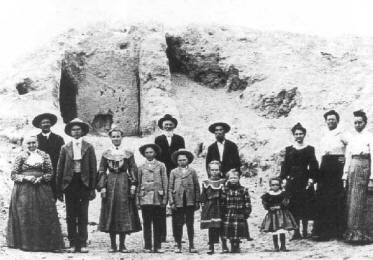 The Lewis family, in front of the mound at Mesa Grande in 1904, carried out excavations to see what was inside. They found a series of thick caliche walls.

Artist Craig Chepley worked with archaeologists to illustrate how Mesa Grande may have looked in AD 1350, looking west. Note the Hohokam ballcourt in the lower right corner of the mural.