In 1998, the Mesa City Council passed a resolution declaring "Rowley Site Day." This declaration marked the end of 15 years of excavation work at the site. The land, owned by Ken Rowley, contained a portion of a large Hohokam village site and was scheduled for development. The Southwest Archaeology Team (SWAT) at the Arizona Museum of Natural History conducted excavations, trained interested volunteers in archaeological techniques and conducted educational programs for local schools and scout groups. The dig on Horne Road introduced thousands of people to archaeology.

In this type of living arrangement, a "compound wall" enclosed a large rectangular area, which was then divided by walls to create plazas and room spaces. The large compound at the Rowley Site had one plaza on the north and a second plaza on the south, divided by a central block of rooms. 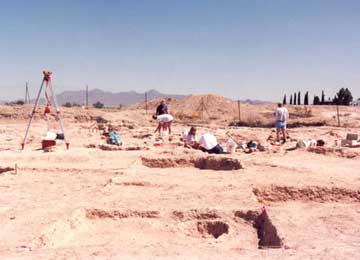 Rowley Site excavations in the plaza area of compound III.

Children participating in one of the many
educational programs at the Rowley Site.