When the Pew family settled in "string town," a series of small houses along what is now Alma School Road, they stored their hay in a raised area enclosed by ancient mud walls. In the 1980s, this special area behind the original Pew adobe home was still undeveloped. With plans to finally sell this last five acres surrounded by modern homes, Joe Pew approached the Southwest Archaeology Team for help. Would the museum be willing to excavate before the site was removed to make way for a self-storage business?

For three years the Southwest Archaeology Team excavated the archaeological site and recorded the historic Pew homestead in detail.

Excavations revealed a series of Classic Period (AD 1100 to 1450) structures, both pithouses and compounds. The deeply buried pithouses, single room structures with floors plastered with "caliche" and dating to around AD 1150, were found several feet under the surface of the ground. The pithouse structures found at the Pew Site were very large, measuring up to 14 feet in length, twice the size of the average Hohokam pithouse. After the pithouses were abandoned, two large "compounds" dating to approximately AD 1300 were built on the ground surface above them. The occupation at the Pew Site spanned several hundred years. 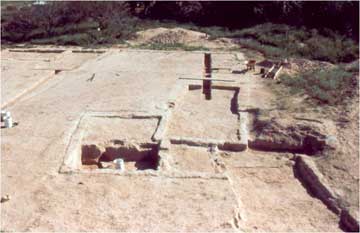 A cluster of rooms within a compound at the Pew Site. 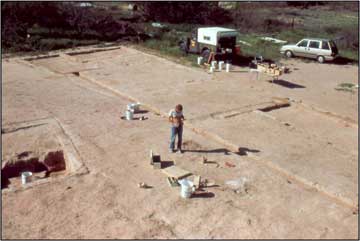 Rooms within a compound at the Pew Site in Mesa.