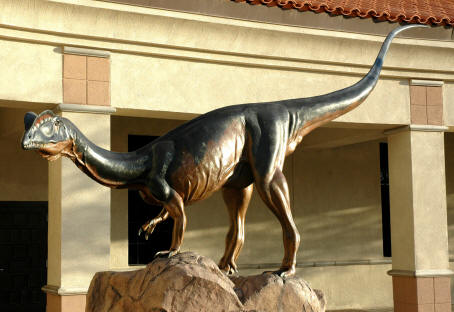 Sculptor Michael Trcic created this life-size, bronze Dilophosaur in 2002 for the museum through the City of Mesa's Public Art Program. The Society of Vertebrate Paleontology awarded this sculpture the Lanzendorf PaleoArt Prize for "outstanding achievement in naturalistic art in paleontology." Dilophosaurs roamed what is now northeastern Arizona in the Early Jurassic, 200 million years ago. 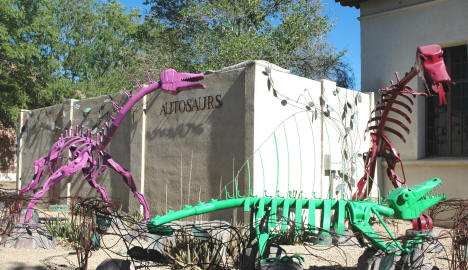 Autosaurs, whimsical sculptures made of old auto parts and other metals, represent T. rex,   Dimetrodon (with "sail" on its back), and a sauropod dinosaur. Ivan Hoffman, curator of exhibitions at the museum from 1983-1990, constructed the Autosaurs between 1987 and 1992. Artist Jim Gary, who created similar works out of auto parts from junkyards, inspired the sculptures. The Autosaurs roam the north campus of the museum, on First Street. 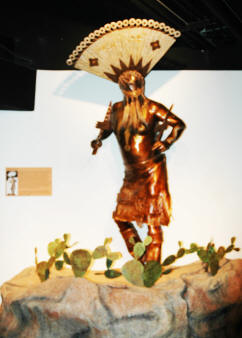 Artist Robert Peyser of Ann Arbor, Michigan created this sculpture of an Apache Gaan dancer for the museum in 1987. Among the Western Apache, Gaan are mountain-dwelling spirits that ward off evil and cure illness. They often appear at night, and dance as part of a girl's puberty ceremonies. The traditional Gaan costume includes hoods with crowns painted in white, black, red, blue and green, painted sticks in each hand, body paint, eagle feathers and streamers, kilts with broad belts and tinklers, and high moccasins with upturned toes.

Base by AzMNH volunteers Jim Britton and Ed Mack.