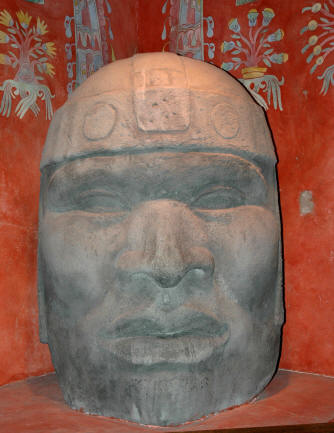 The Arizona Museum of Natural History presents the hall of Mesoamerican cultures because there are links between the high cultures of Mexico and Central America and the ancient Native American civilizations of the Southwest, particularly the Hohokam. Shown is a reproduction by noted Arizona artist Zarco Guerrero of an Olmec colossal head, such as are found at the sites of La Venta, San Lorenzo and Tres Zapotes. The colossal heads, carved from single boulders, stood between 1.6 and 2.4 meters high. Olmec culture in the Mexican Gulf Coast area dates from about 1400-400 B.C. 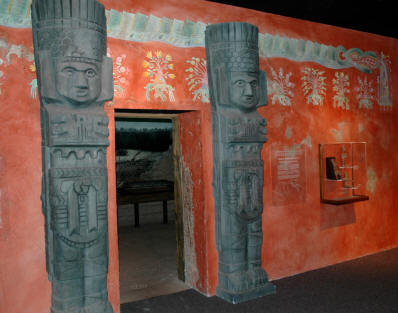 The figures flanking the doorway are similar to those from Tula, Hidalgo, and the wall paintings are in Teotihuacan style. Both Teotihuacan (100 B.C.-A.D. 750) and Tula (A.D. 750-1000) were major ceremonial and political centers in central Mexico. The exhibition displays numerous figurines from Colima, Nayarit and Jalisco in West Mexico, many of which date to the period 100 B.C.-A.D. 300.

Mesoamerican traits found among the Hohokam include construction of temple mounds, such as Mesa Grande and Pueblo Grande, ball courts, religious symbolism, figurines, palettes, copper bells and inlaid shell. The great Mesoamerican food trilogy of maize, beans and squash arrived in the Southwest from Mexico: corn and squash in the period 1000-1500 B.C, and beans around 300-500 B.C.

The first high civilization of Mesoamerica was the Olmec, 1500-400 BC, which flourished in the Gulf Coast states of Veracruz and Tabasco, although Olmec influence spread throughout central and southern Mexico.  Some of the earliest cultures of the Americas arose in the highlands of central Mexico in the vicinity of Mexico City.  By 1250 BC, Tlatilco was one of the major population centers in the Valley of Mexico.  Tlatilco culture is known for its figurines, which offer clues about dress, adornment and activities.  Later, Teotihuacan civilization arose and flourished in central Mexico around AD 100-750.  Teotihuacan is famed for its great pyramids, urbanism, painting and plastic arts, and wide influence. 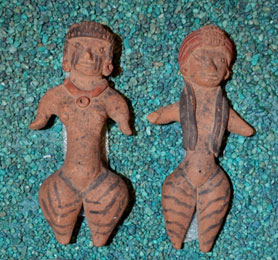 Tlatilco figures, primarily voluptuous female effigies, are some of the finest figurative art created in Mesoamerica.  These two figures are solid ceramic with painted and applied decoration.

At left is a mold-made fragment of an enthroned figure with remains of red and white paint, Teotihuacan IV.  On the right is a Tlaloc figure, recognizable from the circles around the eyes.  Tlaloc was a deity of water and rain, and his images are common at Teotihuacan and later Aztec culture.

The ceramic traditions of West Mexico are well known for their lifelike figurines of humans and animals.  The sculptures show men and women in a great variety of naturalistic poses, with various kinds of dress and all sorts of accoutrements.  Similarly, ceramic artists sculpted many animals in great diversity of motions.  The figurines come from shaft tomb burials in the west Mexican states of Jalisco, Nayarit and Colima. 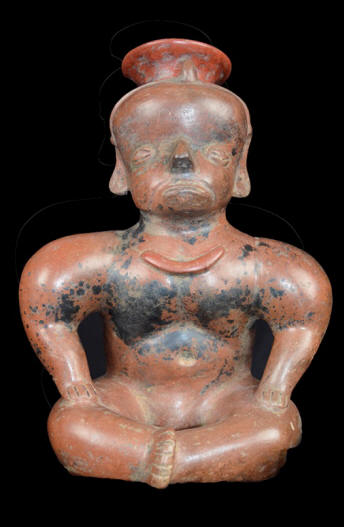 ChupÃ­cuaro was a major site in the Formative Period in Guanajuato, northwest Mexico, known for its ceramic styles, which may have influenced later cultural and ceramic traditions in West Mexico.  This female figurine has a red and cream slip, with inlaid teeth. 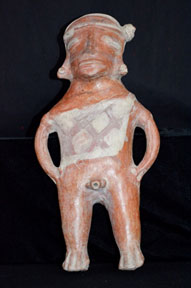 Standing male effigy with white resist decoration and incised pattern on the chest over a burnished red slip.  The hollow ceramic figure has white painted and applied ceramic decoration. 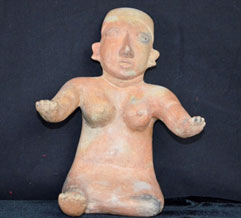 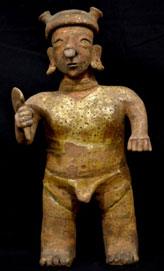 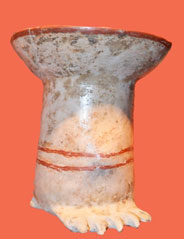 Beaker in the shape of a foot with burnished cream slip and red band decoration.  The toes are more claw-like than human. 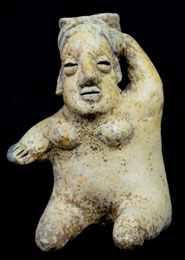 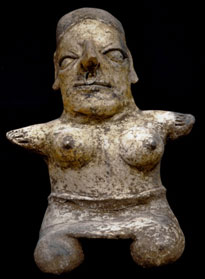 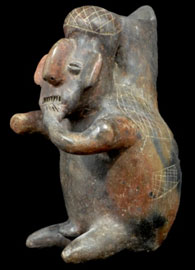 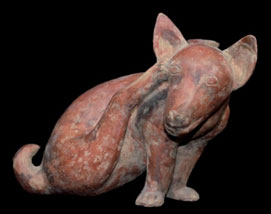 Dog with red-orange burnished slip.  Dogs were a favorite subject of Colima ceramic artists, and believed to be a guide to heaven and a protector of the ancestors. 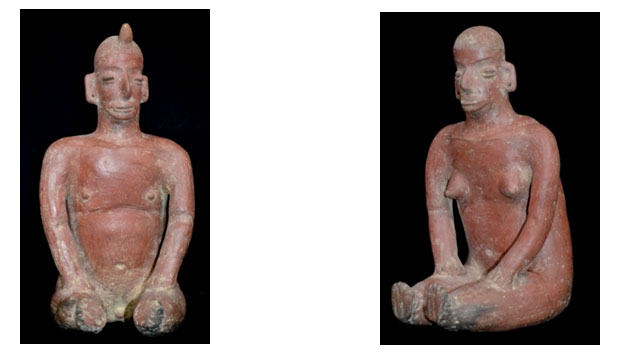 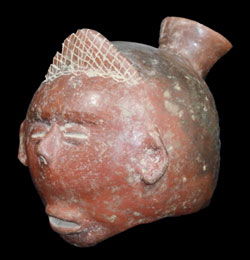 Trophy head.  Trophy heads were often depicted in the art of Mesoamerica. 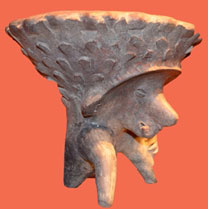 Plainware tripod incense burner with figure supporting a heavy burden on its head and back.

Classic Maya civilization arose in the southern highlands and northern lowlands of Guatemala, in the Yucatan Peninsula and state of Chiapas in Mexico, and in Belize and Honduras.  Maya culture began by 1500 BC with small farmers in the area building communities based on growing maize, beans and squash. 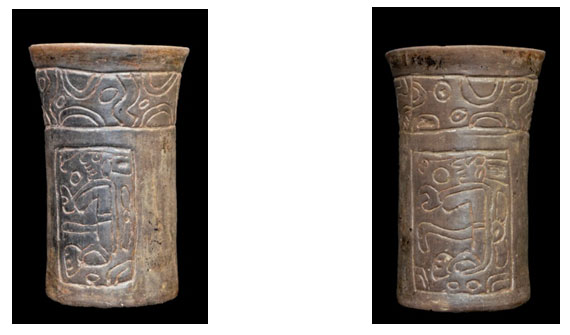 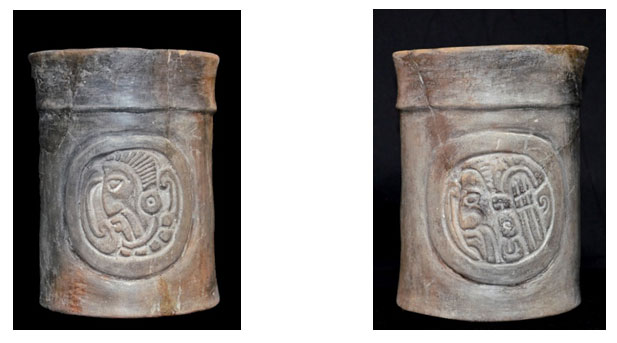 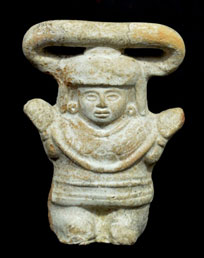 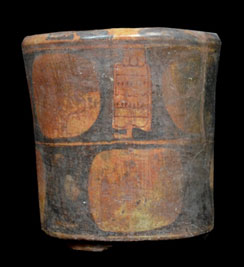 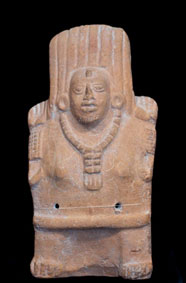 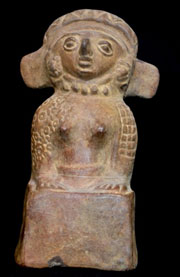 Mold made hollow ceramic female effigy.  The ceramicist depicted a figure wearing an elaborate floral cloak and grinding at a raised metate.

Red on cream jar with a human face modeled on the vessel’s neck.

The earliest ceramics in the Americas occur along the coasts of Columbia and Ecuador dating to about 3500-3000 BC.  Later, some of the most striking ceramic traditions developed in Peru.

In the highlands and adjacent areas, Chaví­n culture, with distinctive architecture, sculpture and ceramics, flourished 900-200 BC.  Along river drainages on the north coast of Peru, regional cultures developed towards the end of Chaví­n, such as Salinar and Viru 500-300 BC.

Moche, 100 BC-AD 700 was one of the most distinctive of the cultures on the north coast of Peru, with highly creative ceramic arts.  Moche potters sculpted and painted a great variety of realistic images of people and animals engaged in diverse activities.

After a period of unification under the Huari Empire, regional states developed on the north coast of Peru, such as the Chimú, AD 900-1430, notable for mold made stirrup spout vessels smudge fired to create black textured surfaces.

The Inca Empire, AD 1430-1532, with its capital at Cuzco, unified Peru briefly before the arrival of Europeans.  The Inca state governed 5,000 kilometres of coastline from Ecuador to Chile, and adjacent parts of Argentina and Bolivia. 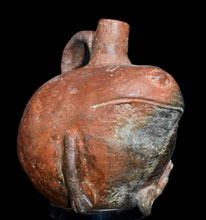 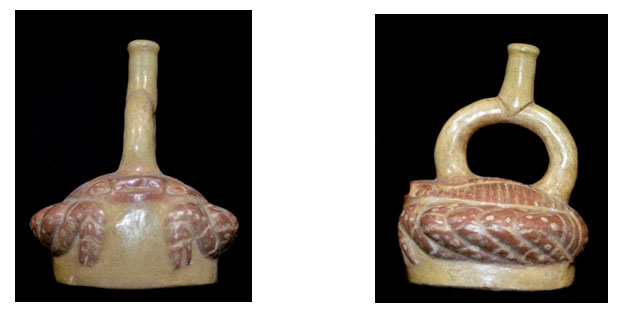 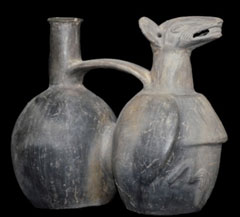 Figure of a bat, blackware double vessel with handle and spout. 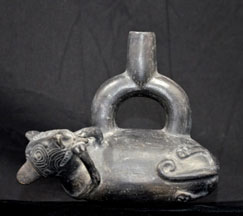 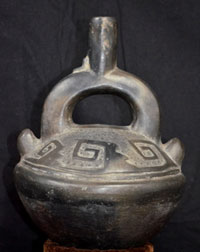 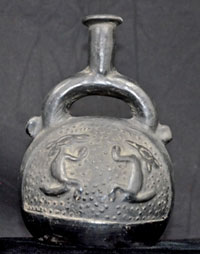 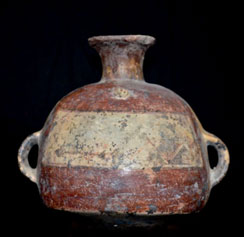