The base of the mountain represents the animals and plants of the Chinle Formation, which was laid down about 225 million years ago, during the late Triassic of Arizona. These rocks today comprise the colorful Painted Desert and Petrified Forest of Arizona. 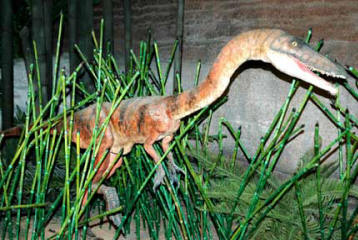 This meat-eating dinosaur is perhaps the best known from the Chinle Formation. At this time, dinosaurs were relatively small and by no means the largest animals in the fauna. Living at the dawn of the age of dinosaurs, Coelophysis was typical for its small size. The skeleton of Coelophysis suggests a swift creature with good eyesight with hands well adapted to seizing and tearing prey. Members ofCoelophysis may have formed packs. 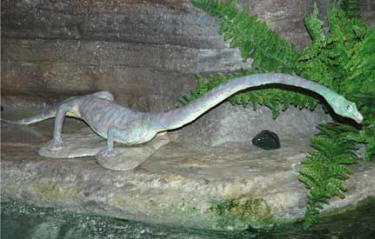 Little is known of this bizarre reptile. Juveniles had three-pronged teeth and adults one-pronged-teeth, which may indicate a change of diet from youth to maturity, perhaps from insects to fish. The neck grew faster than the body, but in spite of its length, the neck was not greatly flexible and its true function is unknown.