Experience the great dinosaurs of the Mesozoic Era come to life on Dinosaur Mountain! See them move and hear the roars of these magnificent animals! At the bottom of the mountain are deposits representing the Triassic Period (245-205 million years ago), with animals around the Triassic pond. In the middle of the mountain are layers suggesting Jurassic age (205-144 million years ago), along with some of the associated dinosaurs, such as Mymoorapelta. Above are animals of the Cretaceous Period (144-65 million years ago), including Albertosaurus and Nasutoceratops. At the top stands a Glyptotherium, an armadillo-like animal that lived during the Cenozoic Era, after the Age of the Dinosaurs. At the very top of the mountain are two animals from today's world, a big horned sheep and a black bear.

See a flash flood on the mountain, and watch volumes of water cascade down three stories approximately every 23 minutes! 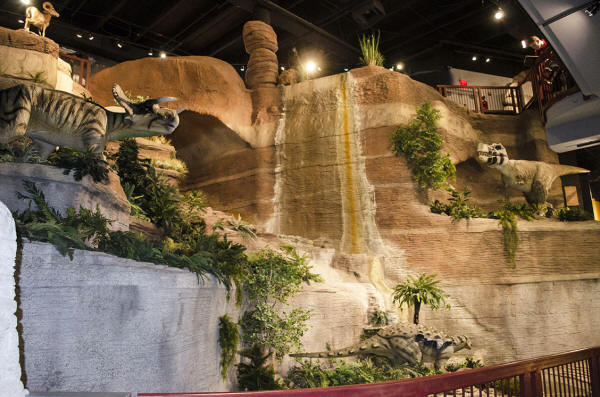