Sauropod dinosaurs were the largest land animals ever to walk on earth. These dinosaurs were masters of their environment, and their weight exceeded 20 tons (40,000 pounds). Footprint evidence suggests the younger ones may have traveled in the center of the herd. Sauropods, first known from the Early Jurassic, survived until the latest Cretaceous and were among the last of the dinosaurs to become extinct. 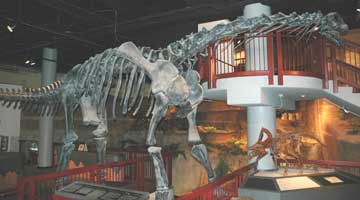 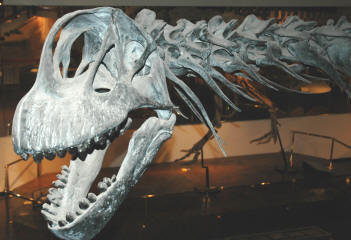 You may touch this fossil femur (thighbone) of an Apatosaurus, previously known as Brontosaurus. These sauropods reached over 80 feet long and weighed over 20 tons, five times the size of an African elephant. The animals traveled in herds, and because of their massive size may have had little to fear from predators. Apatosaurus lived exclusively in the Jurassic. Some roamed what is now Arizona 144 million years ago.