Ceratopsians are the Rhinos of the dinosaur world - large, plant eating and horned. All ceratopsians have a "beak" and at least the beginning of a frill. Later forms also had the well-known horns. 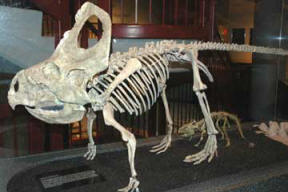 Protoceratops was a small primitive ceratopsian.  Protoceratops and its relatives had a short frill, teeth with single roots, little if any nose horn and no brow horns.  Protoceratops is one of the most common Late Cretaceous dinosaurs in Asia. 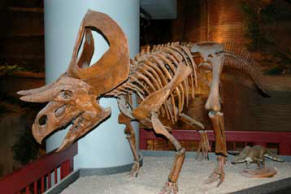 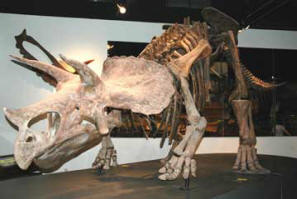 Triceratops was one of the last dinosaurs to roam the Western Interior and perhaps the most abundant dinosaur of its time, 65 million years ago.  Although abundant, Triceratops apparently did not range south of what is today mid-Colorado. Triceratops stood up to 10 feet tall, measured 30 feet long, and weighed more than 6 tons (12,000 pounds).  Triceratops used its long, sharp horns for defense against large meat eating predators such as Tyrannosaurus. This specimen is an adolescent, not yet fully mature. 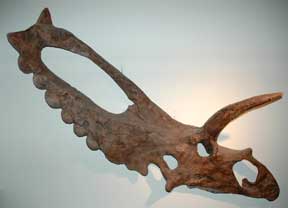 Pentaceratops means "five horned faced," because bones in the"cheek" region have developed into a fourth and fifth pair of horns. To date, Pentaceratops are only known from Cretaceous sediments of northwest New Mexico, about 75 million years ago.