Take a walk through time at the Arizona Museum of Natural History. From the origins of the  universe, the formation of rocks and minerals, to the origins of life, explore Paleozoic Seas,  Mammal-like Reptiles, Triassic Petrified Forests and Wetlands, Cretaceous Seas, and First  Flight! 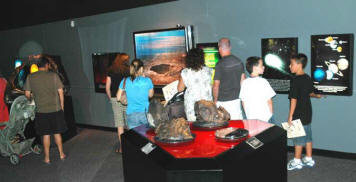 
In this first gallery of the Arizona through Time, explore the origins of the universe,  galaxies, comets, asteroids and the solar system. See and touch several meteorites,  including a replica of the Tucson Meteorite and a piece of the Canyon Diablo Meteorite,  which created Meteor Crater when it struck the earth in what is now Arizona. 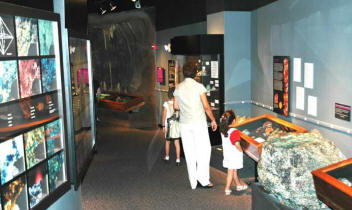 
In the Earth Science Hall, discover the difference between rocks and minerals. Learn how  the three types of rocks, sedimentary, igneous and metamorphic, are formed. Discover the  essential minerals and see blue and green copper minerals and red and orange lead  minerals. Touch a drusy chrysocolla boulder and quartz crystals! Learn all about caves.

Life originated on earth nearly 4 billion years ago, yet multicellular life, organisms  composed of more than one, differentiated cells, did not appear for over 3 billion years.  Thus most of the history of life on this earth is little known.

The emergence of vertebrates onto land, and the transition from fish to amphibian is well  known. Less appreciated is the emergence onto land of plants and at least eleven other  animal groups.

Symmorium, an ancestor of sharks, lived in the Pennsylvanian Period, 311-290 million  years ago, when warm, shallow seas covered much of present day Arizona. 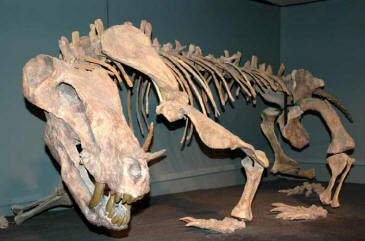 Inostrancevia  belongs to the group of mammal-like reptiles known as therapsids. This  individual lived during the Permian Period, about 245 million years ago, in what is now  Russia. Note how the teeth are of different shapes and sizes, a trait he shares with  mammals. 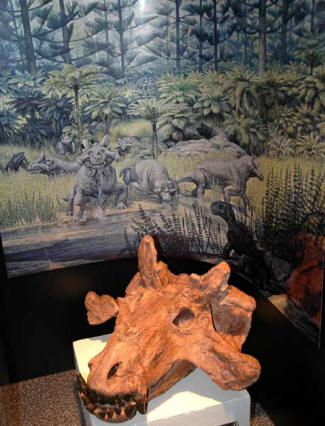 Estemmenosuchus  was a mammal-like reptile with horns that remind one of a moose. He  was about the size of a modern rhinoceros and lived in the Late Permian Period of Russia,  245 million years ago. 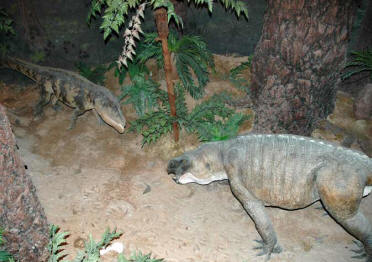 Postosuchus  (left), a carnivore, confronts Placerias, a herbivore in the Late Triassic forest  of Arizona, 225 million years ago. These animals lived in the forests that today we know as  the "petrified forest" of northern Arizona.

Buettneria  was a large amphibian that lived in the wetlands adjacent to what are now the  petrified forests. A lie-in-wait predator, Buettneria lived in the Late Triassic, 225 million  years ago. 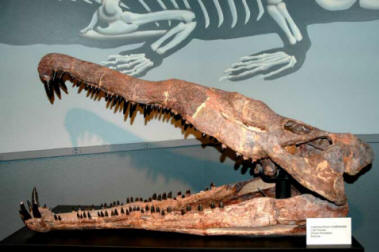 Leptosuchus  is a phytosaur, a group of reptiles that resemble crocodiles but evolved their  form independently. He, along with Buettneria inhabited the wetlands adjacent what are  now the petrified forests of Arizona. 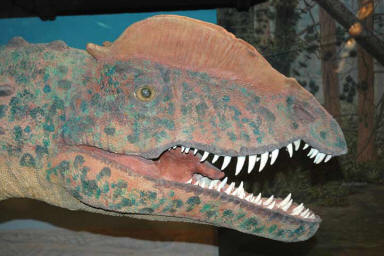 Dilophosaurus is arguably the most famous dinosaur from Arizona. Notable for the two  crests on its head, this predator lived in the Early Jurassic Period, about 200 million years  ago. Dilophosaur remains and footprints have been found in the Kayenta Formation of  northeastern Arizona. 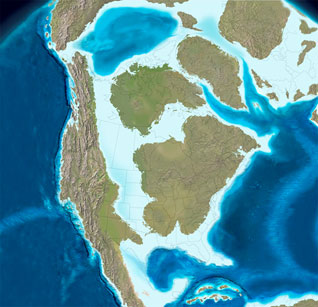 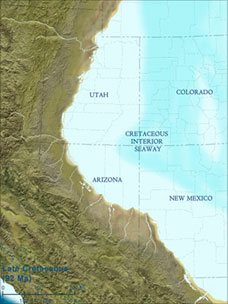 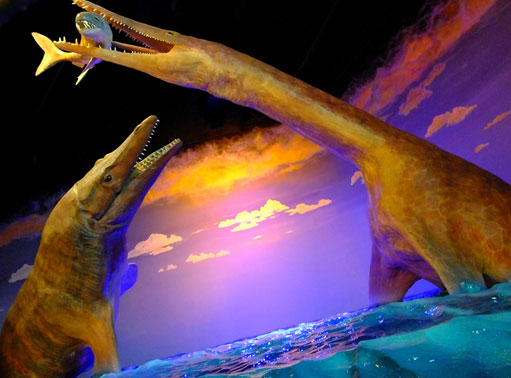 This dramatic diorama represents the Black Mesa area of what is now Arizona during the  Cretaceous Period.  Marine reptiles congregate in a feeding frenzy near the shore on a  warm night.  The long-necked pliosaur has the toothy Encholus in its jaws, unaware that  the mosasaur will deliver to it the same fate. 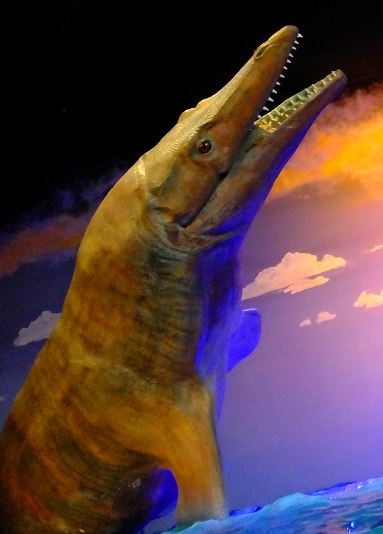 Mosasaurs are not closely related to other marine reptiles but are in actuality gigantic  lizards that have returned to the sea from the land.  These voracious predators developed  an extra jaw hinge that allowed them to open their mouths widely and clamp down on their  prey.  Mosasaurs are most closely related to today's monitor lizards and Gila monsters.    Fragmentary remains have been found in the deposits of Cretaceous seas covering  northeastern Arizona 100 million years ago.

Pliosaurs are a type of plesiosaur, a marine reptile with a large bulbous body, long neck,  small head and four large flippers.  Pliosaurs had a shorter neck and longer head. 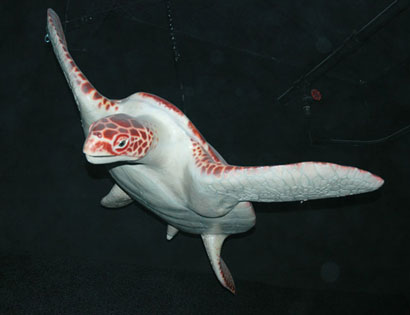 The sea turtle Desmatochelys belongs to the same lineage as modern sea turtles.  Turtles  are the only group of marine reptiles from the Cretaceous Period to survive today. 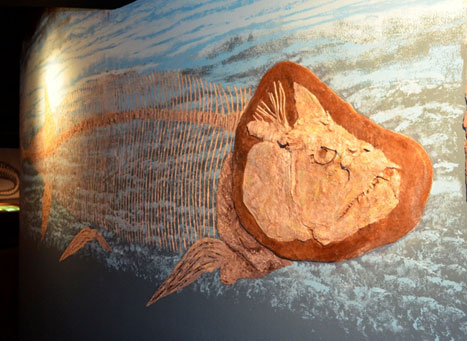 Xiphactinus  audax was the largest bony fish of the Cretaceous, reaching a length of 20  feet  or perhaps larger.  Xiphactinus swallowed its prey whole, and several specimens have  been found with large, undigested prey inside.  It is likely that these Xiphactinus died from  trying to swallow the large, struggling prey.  Xiphactinus fossils have been found worldwide,  including the middle Cretaceous Black Mesa sediments of Arizona, about 100 million years  old.